You are here: Home / Love / Does Anybody Understand My Frustration? Or am I All Alone Here?

It had been a long and tiring 10 days- the perfect recipe for a moment of frustration to pop up at any moment. I had traveled to D.C. and then back home to work a full week of sessions, and then I went to Richmond for another conference. My mind and body were worn out from all of the sitting. I was so glad to be home in time for an afternoon nap, when I noticed just 4 miles from home that it felt like the back end of the vehicle was wiggling.

“Hmm,” I thought. “I must be more tired than I realize. Maybe I'm not steady on the wheel.”

I thought nothing more of it until we went to the grocery store later that afternoon. Of course, I blamed myself again, that I wasn't driving well since I had been on the road so much in the past few days.

But it wasn't just me. My passenger noticed it, too. So when we got home, I hopped out and saw two sagging tires.

“CRAP!” my brain screamed. “I don't have the time or energy for this.”

There is was- frustration in all of its glory. This wasn't going to be pretty. I was sleepy and now overwhelmed. Yuck.

I knew if I took care of it right then, it would save me time the next day. I knew the roads were calmer then, and that if I waited, there would be NO air at all in the tires the next day. I had to do it then. No energy. Just exhaustion and a growing sense of frustration.

I hurried to get to the tire place. There was only 2 hours until they closed, and they usually were backed up.

After deciding to just head there instead of stopping to add more air to the tires, I drove slowly because the entire vehicle was wobbling at this point. I made it safely and in time for them to get them fixed before the end of the day. Whew.

I went back home to wait and rest, instead of staying stuck in a tire place for two hours with a pounding head.

Everything was going fine, until they called to tell me that there had been three nails in two tires. One tire could be plugged. But the other one needed to be replaced.

However, until I went in and paid for the tire, they couldn't put it on. So I needed to get there then and let them process the reduced rate for the replacement tire (since it was still under some kind of warranty).

I wanted to cry. Couldn't they just put it on then and I would pay for it when I got there? Could I read them my credit card number over the phone? Was there anyway around me having to go and pay and then stand around and wait?

No, no, and no were the answers. I was beyond tired and beyond exhausted. The trip had already resulted in extra expenses I hadn't planned on, and now here was one more trip related expense- AFTER I was home.

“You've got to be kidding me,“ I thought. OK, I kind of yelled it out after I got off the phone. “What kind of stupid policy is that? I'm not trying to get out of paying you. I'm just tired. Can't this all be done simply?”

Clearly, my tires were out of air and I was out of patience.

As I fumed on my way back to the tire store, my frustration just multiplied. Being a therapist, I am constantly thinking about the words that are used- by me, by my clients, by journalists, by society, on Facebook- pretty much anywhere.

And while I understood that the man I was talking to had no control over the policy and he was just doing his job, it would have instantly calmed me down if he had said, “Ma'am, I understand. I know it's a bit of a hassle to have to come back in now instead of being able to go on and take care of it over the phone. Trust me, I get it.”

There's just something about being understood in a moment of frustration.

Sometimes I wish that I could help lead trainings on this very concept to customer service teams in work places. I've been in their shoes. My first job was following-up on car repairs at a dealership. I had my fill of hang ups, anger, and frustrations when the vehicle still had problems even after being in the shop. I learned quickly if I wanted to get the information I needed to be able to help them, then I needed to be with them in their moment of aggravation. It went a long way.

Being Understood in a Moment of Frustration is Universal

This incident happened a week ago. But I haven't stopped thinking about it. The truth is, I see this play out in my office every day. Couples come in to see me, clearly in pain. They wonder why their spouse doesn't show them some support. They are angry that they are constantly told to “just get over it.” 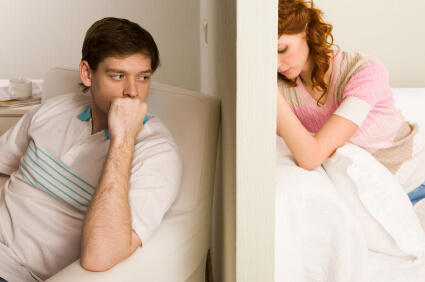 Sadly, the more they hear this, the more their pain just grows. It doesn't go away, no matter how much they want it to disappear.

Ed Tronick, a psychologist at the University of Massachussetts (and known for the Tronick experiment), through his research in infant attachment is helping current marriage therapists to see just how intense emotion can be. More importantly, it illustrates that emotions are meant to be shared, not experienced alone. Feeling things together helps to lessen fear and it builds bonds with loved ones.

Through recent findings, researchers have found that, “our hearts and brains are set up to use our partners to help us find our balance in the midst of distress and fear (Sue Johnson, Love Sense, 2013, p. 63).”

So What Does this Look Like in Daily Life?

In each of these instances, the negative emotion grows because the person experiencing the pain and frustration feels alone. The need to feel understood is vital. That doesn't mean the person has to agree with you, just that you need to know you are heard by someone else.

How Does Feeling Understood Make a Difference?

Let's revisit each of those sample situations from above, to give you an idea of how an empathetic answer to meet you in your moment of frustration can quickly turn the situation around.

As you read through each of these possible responses, take a moment to imagine how that response is meeting that person where they are. Instead of pushing them away and making them feel alone and silly for their feelings, the empathetic response actually pulls them in closer, and thus move them from high alert and frustration to feeling more calm- all because someone is getting a glimpse of how they feel.

Instead, they acknowledged what emotion the person had expressed and met them where they were. Now that they feel understood, the mind and body have a much easier time moving from overwhelmed mode into a more calm mode.

Over the coming week, the next time someone near you is feeling a bit overwhelmed by whatever frustration they are experiencing, try listening for their feeling and making a statement that acknowledges that feeling. Then observe if they calm down a bit faster than if you had made a statement that told them to feel differently.

It's worth a try!